Old Fashioned Fermented Garlic Dill Pickles and How To Make Them

Process, or imitation, dills can be used instead of the genuine, as they will be firmer and not so likely to break down and become soft.
Make a concentrated dill brine and add the necessary sugar and vinegar to produce a sweet liquor and cover the cut pickles.
DILL SPICES
Blend Together the Following Whole Spice:

From visual inspection, especially in the finished package, it is often quite difficult if not impossible to differentiate between genuine and imitation dill pickles. It may only be by tasting that the difference can be detected, and in some cases there might even be a question of doubt. Chemically the difference can be determined.
Too, some packers of genuine dills make a new artificial brine to cover the pickles rather than take the time and trouble to filter the old brine in order to produce a clear, sparkling liquor. A good filter, such as is used for vinegar filtration, can be used, but it must be of non-corrosive material, as both the salt and acid cause rapid deterioration and destruction of the filter. The coarse particles should be removed from the brine by straining, preferably through cloth strainer.
IMITATION, PROCESS, OR SUMMER DILLS
Imitation dills, process dills, or so-called summer dills are those made by taking salt stock that has been completely fermented by undergoing the lactic fermentation in a strong salt brine, leaching out the salt and treating with "pickle alum," adding dill weed, dill brine, dill emulsion, vinegar, salt and spices.
If made properly, this pickle is very delicious, but there are many of such poor quality that they hurt the sale of all dill pickles. To make this pickle, completely fermented salt stock should be used. After sorting for size, the product should be placed in a tank, covered with water and should stand for 12 hours or overnight.
Then cover again with fresh water and soak until late in the afternoon, when the water is again changed and the fresh water is heated to 130 degrees F. and allowed to stand overnight. To this last water "pickle Alum"-—ammonium alum or soda alum (sodic alumnic sulphate—S. A. S.)—is added at the rate of 1 pound per barrel of salt stock. Dissolve the alum in warm water and add it to the pickles, and see that it is mixed. The alum will make the pickles hard, and crisp them so they will "snap" when broken. If there has been no spoilage in the salt stock used, it is most unlikely that any will occur after this treatment as the cells and tissue have been hardened and bacteria cannot then break them down.
Make a brine for covering the processed pickles so as to contain 30-grain acidity and 22-degree salt. Nine ounces of salt per gallon will make a 22-degree brine. In making this brine, add 4 to 5 gallons of genuine dill brine for each 150 gallons and 20 ounces of a 10 per cent dill emulsion. The more old dill brine used the better the flavor imparted.
Place about 3 pounds of dill weed (packed in salt and vinegar) in the bottom of each barrel. Fill half full with the processed pickles and again add about the same amount of dill weed. Fill the barrel
with pickles, sprinkle about 12 to 16 ounces of dill spice on top, then place some more dill weed on top, head up the barrel, and fill with the above dill vinegar, bung and stack. The barrels should stand for at least one week to age properly, and even longer is much better.


Instead of the above dill vinegar brine, the following can be used:
1 barrel of dill weed packed in salt and vinegar
26 gallons of 100-grain white distilled vinegar
350 gallons of potable water
187 pounds of salt
Cook all together for a short time and allow to stand for several hours or even overnight, in order to leach out the dill flavor. This should produce 400 gallons of a 22-degree brine. Proceed the same as above by packing the pickles in barrels and using about 8 to 10 pounds of fresh dill weed and 1 pound of spice to each barrel of pickles. As the acidity of genuine dill pickles is from 0.75 to 1.50 per cent, then these imitation ones should have an acidity close to that.
Dill Emulsion, 10 Per Cent Oil
Dill flavor is obtained by adding a dill extract made either with "grain" ethyl alcohol or some other menstruum, or by using a dill emulsion, or by using dill weed.

This emulsion can be made by using gums, genuine oil of dill and water, and by beating in a mayonnaise beater, in which all the parts are made of metal, to make cleaning easier.
Use this method in making the emulsion: Pour the oil into the mixing bowl and add the gums. Then mix to prevent lumping, and break apart as it permits each particle of gum to be coated with oil and makes a more stable emulsion. Next, start the stirrer at medium speed and slowly add 1 gallon of hot water and follow with the balance of the water, which can be either hot or cold, preferably warm in cold weather. The use of about 1 to 2 ounces gives the desired flavor for each 200 gallons of brine. When a mayonnaise mixer with a separate oil tank is used, the water can be run in from the reservoir.
The National Pickle Packers Association have the following standard for dill pickles:
"Dill Pickles, Standard Grade, should be evenly sorted, full count, good sound stock, free from hollow and slippery pickles. Package should be well filled, properly graded and stencilled as to size. Good sound cooperage."
The only reference to quality is "good sound stock, free from hollow and slippery pickles," but nothing is. mentioned about imitation dills or salt stock dill or of acidity and salt or flavor.
In drafting Food Rules and Regulations the Board of Chemists of Pennsylvania took into consideration both the genuine and imitation or process dills and have formulated the following:
"Pickles, Dill, are made by the natural lactic fermentation in brine, of cucumbers with dill plant and/or dill oil with or without the addition of other spices and the finished product contains not less than five-tenths per cent (0.5%) lactic acid nor less than four per cent (4.0%) of salt."
"Pickles, Dill, Process or Imitation (Summer Dill) are made by treating salt stock cucumbers or pickles with dill plant or dill oil or both, with or without the addition of a vinegar and with or without the addition of other spices."
It is manifestly unfair to the packers of genuine dills to have to compete with packers of imitation dills on the same common ground without some protection. There is no objection to the sale of imitation dill for what they are. In fact, some imitation dills are better than poor genuine ones. They certainly should be labeled properly, and, unless they are, no doubt some prosecutions will compel different labeling.
DILL JUICE
Sauerkraut juice is being sold for cocktails and is being advertised extensively. Being a natural aperient, it contains lactic acid (lactic bacteria and some yeast). It has a sharp, acid taste that is both palatable and appetizing. The lactic acid which it contains aids digestion and regulates the removal of waste material from the body, stimulates the normal action of the intestines and prevents the growth of harmful bacteria which cause auto-intoxication.
To read the above paragraph one would think that kraut juice was being discussed, but such is not necessarily the case. The same qualities that have been applied to kraut juice can also be applied to dill juice. It is pleasantly acid with a fine spiced dill flavor which will appeal to some in preference to kraut juice.
While this product is not being sold commercially, there is no reason why it cannot be placed on the market the same as kraut juice and be given the same high position that has been accorded kraut juice. There is an opportunity for some progressive firm to start a new product on the way to high national honors. Since we are now having campaigns on orange juice, tomato juice and kraut juice, why not dill juice?
As cucumbers contain about 3.0 per cent sugar, then if completely fermented the brine should contain about 1.50 per cent lactic acid and the salt, varying, of course, but usually containing from about 20 degrees to 22 degrees (equivalent to from 5 to 6% per cent salt).

These results show that when genuine dill pickles are covered only with a salt brine, they will still have sufficient acidity to be passed as genuine dill pickles.
I have seen so many many recipes and instructions for making authentic garlic dill pickles, that I thought it rewarding to post the authentic method for the manufacture of this food delight. My pickle pix are below. 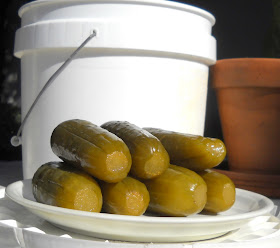 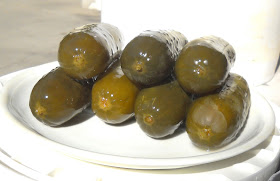 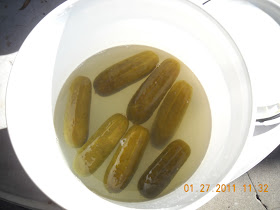 Addendum
I cannot help but smile as I post the picture below. I saw this today at a thrift store and it sure does look nice. But the recipes call for vinegar and that's a no-no if you want real fermented dill pickles. 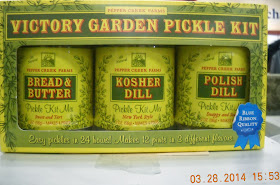